The Chemistry of Joy : A Three-Step Program for Overcoming Depression Through Western Science and Eastern Wisdom - Information, Comparison & Prices 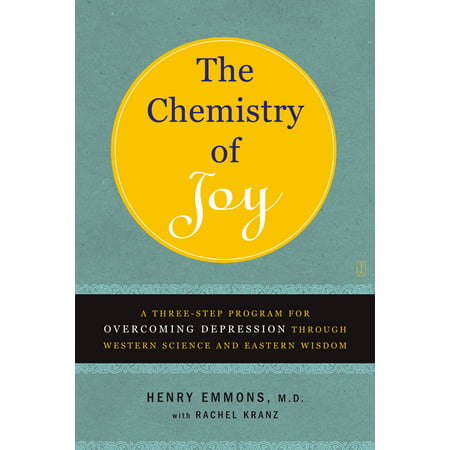 See it at Walmart
See it

The Chemistry of Joy : A Three-Step Program for Overcoming Depression Through Western Science and Eastern Wisdom

The author examines three core types of chemical imbalance that result in different categories of depression and presents a practical program for each that includes a "brain-healthy" diet, exercises, and supplements.

This book has some ver...
★★★
This book has some very good information. The explanations of brain chemistry are clear without being too oversimplified. I don't know enough about Ayerveda to have a feel for the accuracy of that section but it, too, was clear and interesting. The section on Buddhism seemed grossly oversimplified, but given that it's more aimed an an audience that has no familiarity with it, that's probably a wise choice. The frequent use of example cases helps make the information and suggestions very real and more understandable. But, I have some problems with this particular work. My biggest problem is the overall condescending tone. Everything presented in the book in some way belongs to the author (I advise my patient's to) and if the reader would just do what the benevolent doctor says, all will be well and you'll loose weight. Even if he's right, he doesn't have to be a dick about it. Which leads me to another problem - pervasive fat phobia. Almost every female example in the book gained weight with the onset of mental ill health, and lost some or all of it once she obeyed the doctor's suggestions. The entire book carries an undertone of blaming the patient, but overweight carries an overt, finger-wagging disapproval. It's not that he's saying overweight people are evil - but the author seems to think it's more okay to blame an overweight person for their mental health problems, which makes it harder for me to take him seriously. I found the book often repeated itself. It didn't actually plagiarize itself, but similar information would be repeated over and over. In the first section, the author alternately suggested supplements to help brain chemistry imbalances, and insisted that the reader should work with a professional before taking supplements. The combination of repetition and conflicting messages made the first section a bit eye-crossing to read. And, finally, the information was generally presented as somehow belonging to the author. Sorry, but Buddhist meditation techniques have existed must longer that this book. Yes, it's a nit I'm picking - his wording for a guided meditation is, in some fashion, his, even if the idea for it has existed for 1000 years. However, it annoyed me to no end. So, the content is solid, but the presentation grated on me. I'd love to find a similar book with a different tone/feel.
By hopeevey on 2018-05-17

Above reviews were provided by Walmart.com