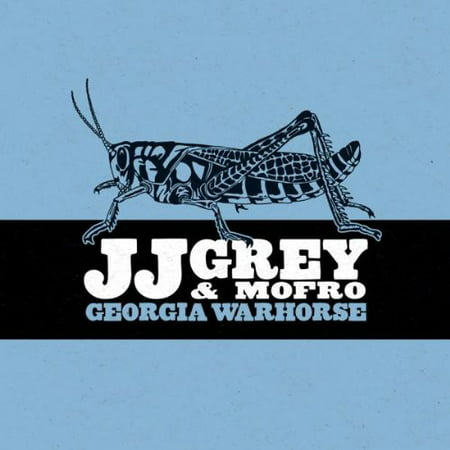 See it at Walmart
See it

Worth it
★★★★
Stax, Otis, Cocker, Van Morrison, Little Feat... Georgia Warhorse will empty, evert and cleanse your soul. Then it'll hand it back to you shiny and new. But unlike, say, Blackwater (so love that drumming!!!), this one had to grow on me. It also needs more Hance, harmonica, luscious keyboard licks... in short, the stuff that elicits groans. A bit lazy and overly-repetitive in parts (how many Diyo-dayo's and Sweetest Things do we need?... we get it). But in whole, (and in part due to its stomp/boogie cuts) JJ et al. have proffered some of my most joyful moments available lately. As so with all the other works, it is sublime.
By B. Grier on 2010-09-02

Soul Music
★★★★
Definitely a "swampy" soul band. This is the best of their last three CD's. Great musicianship and vocals. This CD is not quite as "polished" as the previous two, which is a good thing. I love the fact that they stick to their roots...not about to compromise for the almighty dollar. Look forward to seeing them live. If you like blues and soul music, you should pick this one. You will not find a more original sounding band. Highly recommended.
By William Parr on 2010-09-02

Thank you Amazon
★★★★★
A big thank you to Amazon because their "free song of the day" has allowed me to sample so much music and discover talent that I might otherwise never have experienced. JJ Grey & Mofro is a perfect example of one of my prized Amazon discoveries. I love their music and now own everything they have released. This collection is smooth and such a pleasure to listen to and has further solidified JJ Grey and Mofro as one of my favorite acts. This collection is definitely worth the purchase price.
By Music Lover on 2010-08-30

Another Step In The Right Direction!
★★★★★
How is that this band just keeps getting better? I thought ORANGE BLOSSOMS was great, a huge step forward both in direction and in quality. GEORGIA WARHORSE may be even better. JJ's writing seems to be growing in leaps and bounds from album to album. I really like the booty-shakin' numbers like "Hottest Spot In Hell," "Diyo Dayo" and "All," but it's the slower tunes that really showcase JJ's songwriting talent. "Lullaby," "King Hummingbird," "The Sweetest Thing" and "Beautiful World" are all incredibly beautiful songs. My favorite on the album so far, though, is the title trrack, a slow-churning swampy blues with tons of attitude. Fans of JJ Grey & Mofro are gonna love this album, as it is a quality addition to the band's catalog. I hope many new listeners get a chance to hear it, too, because I think it could definitely win some people over.
By Randy on 2010-08-24

JJ and the Boys are Back!!
★★★★★
Pardon me for just finding out about this incredible band over 4th of July weekend, but that is how long I have been listening to them! Already have tickets to the Telluride Blues & Brews Fest to see them! Georgia Warhorse is an all around CLASSIC Album! Already in my top 10 favorite albums! "Georgia Warehorse" and "Lullaby" are great songs! "King Hummingbird" could be the song that puts them into the mainstream but we as fans don't need to that to happen! All the other fans do not need me to tell them to go get this album, they already have it!! Cannot wait to see these guys live!!!
By Garett Piencikowski on 2010-08-23

Back to Soul
★★★★★
After 2 years (almost to the day) since Mofro's release of Orange Blossoms, they release Georgia Warhorse...and not to disappoint. To be entirely honest, I'm a huge Mofro fan, and Orange Blossoms didn't really "do" it for me. Country Ghetto was indeed a great album, but was an indication on the band's lack of direction. I expected Country Ghetto to be more of a Blackwater or Lochloosa, but it wasn't. Again, it was good...but different than what I expected. JJ had replaced that deep organ and harmonica sound for a brass section, and it worked for Country Ghetto, but I didn't feel it working for Orange Blossoms. Orange Blossoms was full of the upbeat energy that listeners love to dance to, but it seemed to lack the passion that JJ bellows from his gut. After OB, I was apprehensive that the band was going to pursue this new, semi-overproduced direction. Not to say I still wouldn't have been a Mofro fan, because Pearl Jam did the same thing...and still doing it. I'm still a huge Pearl Jam fan, but prefer their older, early 90's tracks; however, Georgia Warhorse could very well be renamed "Redemption". Georgia Warhorse may be my favorite album so far. The simplistic nature of Mofro is once again found. You can hear JJ's soul cry in King Hummingbird (the song gives me chills). Gotta Know and Lullaby are extremely moving songs as well. All and The Sweetest Thing are both feel good jams, with styles learned from the previous 2 albums, but didn't neglect the soulful jive. The album is full of that melodic, three-chord artistry that will humble you, making you appreciate every aspect of life. The album breathes a reverence, which makes them unlike any other band. Basically, Mofro went back to what it knows best...and whatever that is, be it blues, rock, soul, gospel, country, etc...it works. They have such an eclectic style; I never can describe what kind of music they play. Whenever I try explaining the sound to someone, I usually say it's a "Swamp Soul".
By Wrangler1217 on 2010-08-23

Above reviews were provided by Amazon.com